Sin's Thief has been RELEASED!

Sin's Thief (Vampires of Vadin 3) has been released!

Well, It has been released for a few weeks now but I have just been slow to make a blog post about it lol! 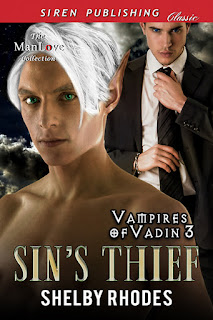 Fouled mouthed, snarky and overly pessimistic, Cecil Baxter's rules for life are to trust no one and to never become attached. Since birth, his life has been one pitfall after another. But when freedom was a fingertip away, Sin, a sophisticated man with a vocabulary to match jumped in his path. Thrown into a world he doesn’t understand, Cecil finds himself breaking all his rules just for a chance to be with Sin.

Sin Draven, leader of the Draven Zaytari, knows he has quirks. Many would see him as an overly calm, civilized individual. However, people often forget that most everyone has darkness inside them and Sin is no exception. When approached by a hurt young man his honor demanded he help, thief or not. That instance leads to Sin finding the one thing he has always wanted—a home.

When outside forces, misunderstandings, and inner turmoil pulls them apart, they must fight their fears before all is lost.

Note: This book contains self-harm and touches on suicide and depression.

Excerpt:
Backpack on, he eased the door of his bedroom open and slipped out. Cecil briefly entertained the idea of sneaking into the man’s room for the money, but in the end, he decided to not risk it. Quieting his breathing, Cecil made his way through the house toward the front door.

If only he could have silenced his heartbeat. It was thudding loudly in his ears, so much so Cecil had missed the movement to his right.

Good thing his father was too stupid to maintain an element of surprise. “Where the hell do you think you’re going?” Ernest slurred.

The man was swaying, but apparently mobile enough, Cecil thought when his father lunged for him.

Shooting forward, Cecil felt the scratch of Ernest’s nails as he barely escaped the man’s grasp. His sprint through the house was short, but by the time he made it to the door, his lungs were sputtering along pathetically.

Even with his hands trembling, Cecil somehow managed to get it open. Unfortunately, he was only able to take a single step outside before his father was on him again.

The man hurled himself at Cecil, taking him down. His knees slammed on the cement steps while his hands scraped against its rough surface. Luckily for him, Ernest was so drunk that the man’s aim was off and had only managed to grab hold of his legs.

Cecil frantically tried to get away. He caught a break when one of his legs broke free. And with all the strength he could muster, Cecil kicked his father in the face.

Ernest howled in pain, his hands releasing him to clutch his nose. Free of his grasp, Cecil scrambled up and darted off. Weaving in and out of alleyways, he ran as fast and far as he could. But he only managed to get about a mile away due to his damaged body.

Cecil’s lungs burned. Dizzy, he staggered out of sight into an alley and plopped down on the wet ground.

Oh, God, he couldn’t breathe—couldn’t even gasp for air. Pushing back his panic, Cecil forced himself to take short, control breaths.

Each draw of air was a struggle, but Cecil refused to give up. The last thing he wanted to do was pass out. And judging from the black spots forming at the edge of his vision, he was pretty damn close to doing that.

Resting his head against the brick building behind him, Cecil continued to focus on just breathing. It took longer than he thought was normal for him to finally move past the “about to pass out” stage.

Not that he was breathing particularly well, Cecil just no longer felt like he was about to die. Which was all well and good, but his current distress cemented the fact that his body was truly fucked up. And because his burst of adrenaline was fading, Cecil now had the joy of experiencing all new twinges of pain courtesy of his fall—because he so needed more, he thought rolling his eyes.

Needing something to take his mind off the shit show that was his life, Cecil pulled his backpack off his shoulders. Ignoring the stinging of his scraped palms, he opened it and pulled out a leather roll that he quickly unrolled—inside was a knife.

For just a moment, Cecil stared blankly at the shining blade. Then without hesitation, he slid it across the damaged skin of his left palm. Drawing on the powers infused in his very existence, he pushed it into the blood that was welling up. In his mind, Cecil saw the starts of a creature, an arcanid that lacked both thought and purpose—a blank canvas. A creature who would move only when instructed, one who would have purpose only when given.

With his thoughts, Cecil infused it with his will. He molded it after all that came before it. Cecil instilled in it traits that would comfort, movements that would convince many that the creature had a will of its own. Movements that covered up the fact that the creature was nothing more than a mindless drone that followed a program. A drone that could be created again and again and be exactly as the last.

When Cecil shoved his wants and needs through his veins, the creature rose up and formed. The arcanid’s body was divided into two sections; it had ten legs, fangs, and wings on its back. While the wings were not for show, Cecil created them with no specific reason other than that he liked them.

The arcanid continued to twitch while its form stabilized, the creature’s iridescent silver skin shimmering with each movement. Soon the awkward shifts stopped and it stared up at Cecil. Its wings fluttered, flinging off the blood it had emerged from.

Smiling sadly down at it, Cecil murmured, “Welcome back, Drop.”

Drop affectionately nuzzled against his hand. If only that affection were real...