Hello everyone!  So, I have some news! Asher's Fire is set to be released on bookstrand on April 20th! There should be a pre-order link soon, I'll post when I have it.

As for other places like Amazon, it should be up on there about six weeks after the initial release date. I will post when it is up there as well.

Next order of business the cover! 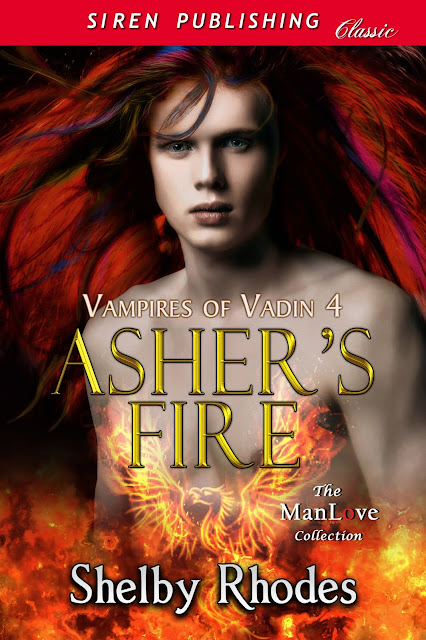 As a phoenix, Asher is doomed to live losing those around him and then slowly have his memories ripped from him, sometimes by the fates themselves. Yet he foolishly still fell in love. His latest was more hopeless than the last. Maybe even more so as the only emotion he received from Kaiden was anger.  ​

Kaiden Voltair would admit he was struggling to move past the death of his son. He knew he needed to let go of the pain and guilt, he just didn’t know how. What he did know was he had to stop lashing out at the very person who had pulled him from his deepest despair. Asher deserved better.

Summoned by the Phoenix Council, Asher and Kaiden go on an adventure into the Third Realm. There Kaiden discovers all that he’d been overlooking. A battle follows, a grave is robbed, a secret crush is discovered, along with a lot of questionable behavior in between, but finally, Asher grabs hold of what he always wanted—Kaiden’s heart.

“Dorian!” Kaiden gasped, breaking free of a nightmare that had plagued him for years. Grabbing at his chest, he struggled to calm his fast-beating heart as much as he struggled to gain a calm breath—he succeeded in neither and instead started to gag and cough.

Kaiden took a staggering step out of bed and ran to the bathroom in time to dry heave into the toilet. Sweat dripped down his face, mixing with the tears he had continued to cry even upon waking. Kaiden let the weight and exhaustion of his body take him down to the tiled floor and lay there against the toilet as he waited for his body to overcome the stress and anxiety the dream caused him.

It was unlikely he would sleep again tonight. His mind frustratingly seemed to take each precious memory, small or large, didn’t matter, and twist and taint it with that of his son’s final moments. Though Dorian had never blamed him. His sweet boy would have never done that. Luckily enough, Kaiden blamed himself enough for the both of them.

Body back under control, he picked himself up off the floor. Grabbing a washcloth, he started the water and washed off his face—followed by quickly brushing his teeth.

Exiting the bathroom, Kaiden checked the clock on his nightstand and winced when he saw it was only 3 a.m. He had only been asleep for a measly three hours. Having flown back on Adrian’s private jet, he and Asher had arrived back at the castle just that past morning. Kaiden had then spent most of the day in meetings after the flight.

Going to his wardrobe, he opened the right door, pulled out a plain black long-sleeved shirt, and promptly pulled it on, slipped on a pair of black slippers, and exited his room, heading towards the garden. Entering the garden, he took a deep breath to take in the fresh air. He needed it after his nightmare. But another scent other than the flowers hits his—burning oak. Knowing the scent, Kaiden followed it to the source.

He heard him before he saw him, as Asher was once again grumbling in a language he did not know. While he was not exactly sure what he was saying, judging by the way it was being said, he surmised that Asher was cursing.

Turning a corner in the maze-like castle garden, Kaiden found Asher sitting on a bench, swearing down at a letter grasped tightly in both hands. His hair was once again on fire, floating all around him. But at least that seemed to be all that was on fire this time. Curiously enough, the letter looked to be the same as the one Asher had grabbed in the room.

The flames extinguished, and the man looked up, no doubt having sensed him. Asher put the letter in one of his sleeves and asked, “Kaiden, what are you doing up? More importantly, why are you here?”

“I couldn’t sleep and decided to take a walk to tire myself out,” Kaiden lied effortlessly

No doubt, he did. “You would think that, yet I’m wide awake.” Kaiden laughed lightly as he strolled over to Asher and waved towards the empty spot on the bench. “You mind?”

Asher sighed. “Why not? Not like you’d leave if I asked.”

Kaiden sat down. “Are you still angry with me about what happened?”

“Already forgotten, Kaiden. I’m not so petty to hold a grudge over such things. Nor do I have the energy or the memory space to bother.”

“Then what is wrong, Asher? You have seemed on the verge of destroying everything around since that night at the hotel.”

“It’s complicated, and we both know you are not ready for complicated.” Asher huffed, shoulders slumping, looking both tired and sad.

Not wanting to even begin to try to understand the last part of Asher’s statement, he chose to not acknowledge it at all and instead ask, “Does it have anything to do with that letter you just put away? The same one from the hotel, is it not?”

Sighing, Asher pulled out the letter and held it in front of him. There was a red seal on the front and what Kaiden believed was a phoenix in flight and words in a language he didn’t know.

That wasn't exactly what he was expecting when he had asked. Then again, Kaiden didn’t know what he had been expecting—possibly a message from a family member. For being from such an important governing body, it seemed a bit too unopened.

“Correct me if I am wrong, but should you not open that?”

“I decided I would burn it instead,” Asher declared.

“Well, at least I would burn it if it could be burned.”

“Why do you not want to open it? They are your governing body, are they not? While at times you seem easy to anger, from what little I know of you, you are not one to let petty things and anger guide your way when it comes to important things. So, what has this council done to draw such anger from you?”

“THEY STOLE EVERYTHING FROM ME,” Asher exploded, his voice booming and full of malice. A quick burst of flames flared upward from the man’s hair before retreating and leaving behind a puff of smoke.

at April 08, 2021
Email ThisBlogThis!Share to TwitterShare to FacebookShare to Pinterest