Get It Together Released!

The first book in The Undead Detective Agency has been released!!

It is available to buy and borrow in KU

Get It Together will also be available in paperback and hardback. I'll post once those are up for sale! 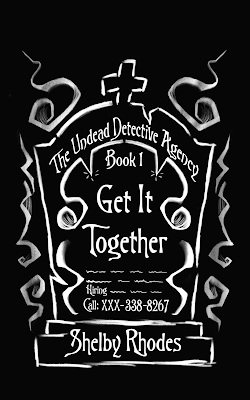 Blurb:   Hello, there! I’m Octavius Evander. And this is the beginning of my story—well…sort of. It’s not the very beginning. As a vampire, that story would be way too long to write down—think, before the Romans. Rather, this story is about how I met the love of my unlife. Okay, it will be mostly about the cool and fancy detective agency I opened and solving mysteries, but also a little about love too.
So, what does one need to open a detective agency, you may ask? Well, for one, a detective. As it was my idea, and I paid for everything, I, of course, filled that role. Next, I needed a secretary. My beautiful and marginally dangerous best friend Scarlett filled that role. Now, I will admit, at that time, I had not thought further than that, and simply skipped to getting my detective license, an office, and some other necessities.
My mind might have been too full of the fun adventures I was about to have. My hope was that those in and out of the paranormal communities would keep me entertained for a very long time. I quickly realized I still needed a driver, a tech person, and a witch that was good with ghosts. This is the story of how I found those people. And who would have thought the first to walk through the door would be human, with no knowledge of the paranormal—my precious Turney.
CONTENT WARNING: This is a slow burn M/M paranormal romance series with a bit of heat. There will be blood, violence and death. Please do not read if you find any of the previous triggering.
Excerpt:

“License, check! Office…” Octavius Evander spun around in his spinney chair. The practically empty office and his secretary—slash—friend's face blurring as he did so. Octavius had to admit it wasn’t much of an office at the moment.

The building he had purchased was located in the busy side of the city of South Windsall, Connecticut, where many other businesses thrived. Did he need the whole four-story building? No, not really.

But Octavius had no intention of using all of it, or any plans to remove the current businesses working inside. His only interest had been a small office space on the third floor. Why rent one space when you can buy the whole building? Besides, now he didn’t have to worry about gaining permission to make changes, or about getting noise complaints from nosy neighbors.

The office in question was rectangular, with white laminate floors and white walls. It was only about 1000 square feet and had a completely open floor plan. Practically empty except for a few bits of furniture left by the previous tenants. Bonus, the large window on the far side gave a gorgeous view of the ocean. It would do until they had time to renovate!

Octavius stopped spinning to finally say, “CHECK! Now…” He tapped his chin, thinking. “I just need a flyer! And maybe an accountant. Though, I suppose I can use my current one. We may need some cameras and a few candles, some decorations, a sign, a witch, a car—”

His eye twitched, as the last time he drove flashed to the forefront of his mind—the smell of burning metal wafted forward, as did the charred flesh and feeling of broken bones. Shuddering, he gasped. “No! No car, a driver. Okay, I need a lot more, but it’s a start! But first off, a flyer!”

Octavius grabbed a blank piece of black paper from the rather large stack on his desk,  before he pulled a pair of glasses out of his pocket and put them on—for aesthetic purposes only—and started to write and draw on it with a white colored pencil. Octavius worked on it for the next few minutes, scratching his brow every so often, before exclaiming in excitement that he had finished!

“How does this sound?” He cleared his throat and began to read out loud.

Lost something? Relative dead and never told his secrets? Think your spouse is cheating or

The Undead Detective agency is here to help. We will find, summon, and uncover all you

Currently hiring: a decorator (temp), a driver, a tech person (must be good with cameras and computers),

and a witch (good with ghosts). PAYS WELL!

“How does that sound?” he asked Scarlett again, after she remained silent. His friend was giving him a rather incredulous look, he thought.

“Like you are a nutcase,” the redhead mused dryly.

His smile fell. “But I think it’s eye-catching! Don’t you? I made a tombstone design and everything, look!” Octavius held it up to show her.

“Last time I checked, humans still outnumbered us paranormal creatures. Who are you planning to draw in with this?”

“Everyone!” he said, spinning in his chair again.

“Why is the paper black?”

Octavius really didn’t want to answer that. “Just for fun.”

“Okay, but why are the four boxes of paper in the corner marked ‘office paper’, the paper I asked you to get, also all black?”

He scrunched down under her judging gaze. “Well, you see, we are The Undead Detective Agency. And I thought, well, why not stick with the spooky theme and only use black paper!? So, I bought it instead of white. I did then realize the issues we would have reading what we printed. So, I, being the smart person that I am, canceled our printer orders, and instead bought a few modified printers that print on black paper in white ink!”

“You couldn’t have just returned the paper?”

Octavius gasped. “But the theme!”

She let out a long-suffering sigh. “Should you not at least put the hiring info on a different flyer?”

“But that would be such a waste of paper! Think of the environment!” Or rather, he had just spent all that time and didn’t want to spend even more time remaking not one but two flyers.

“As much of a waste as an ancient vampire suddenly deciding to open a Detective Agency, for no other reason besides that he is bored?” She deadpanned, not even blinking—not that she generally needed to blink.

“Well…you eat brains. What do you know?”

“I can also eat delicious sweets, unlike someone I know. What about it?”

He dramatically grasped at his chest, his mostly unbeating heart under his palm, and let out a high-pitched whine. “How could you?! And what is so wrong with trying to get a hobby?”

Octavius’ despair at never being able to taste, to savor solid sweets again, hit him like… well, much like that truck had hit him the last time he had driven. He still had hot chocolate, but it wasn’t the same!

Scarlett Beaufort, his best friend, and the gorgeous zombie who perpetually appeared fed up with his existence, walked over and patted his back almost robotically. “There. There,” she said, voice as stiff as wood.

Also up for pre-order are the other four books in the series! (all scheduled to be released sometime next year) CLICK THE IMAGES TO PRE-ORDER!!