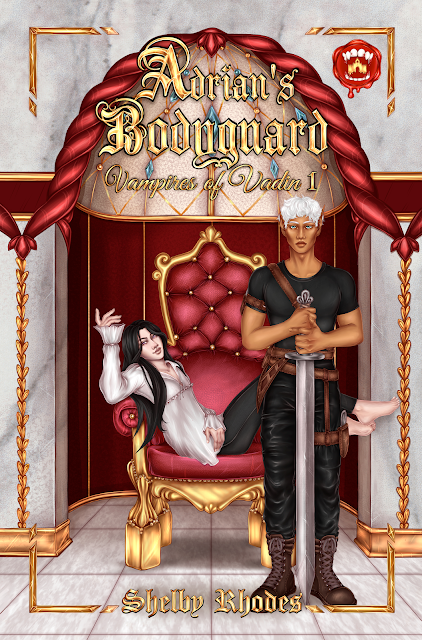 (look at the gorgeous new cover!)
Adrian's Bodyguard has finally been republished! So a bit about the book. It is my first published book. I released it under a publisher in 2017 and I just got the rights back in the last few months. The book follows the story of King Adrian and a his new Bodyguard, Xavier, who was forced on him. While the story is still the same, with the same lovable characters, I did add 5 new chapters (About 6k new words). So for those who were here when it first came out there is new content, new craziness to discover!

Anyway, you can find the book here: Mybook.to/AdriansBodyguard

Blurb: Vampire King Adrian Bloodhart has faced many challenges in the thousands of years he's been reigning. However, he had thought he'd moved past the stage of his life that was littered with assassination attempts. And, as if the attacks weren't irritating enough, he finds himself saddled with a personal bodyguard he doesn't feel he needs or even wants.

When Xavier Dayden had agreed to guard King Adrian, he had expected to be guarding a mature adult, but what he got was a petulant child. Adrian is odd as hell and too sexy for Xavier's peace of mind. When Xavier finds his control slipping, he's conflicted. Giving in could lead to so much more than a one night stand, but was it worth the possible heartbreak?

The choice is made when tragedy strikes where it is least expected and, as Adrian's walls crack and fall, Xavier is there to pick up the pieces. Through the heartache, love is finally in their grasps.