Adrian's Bodyguard has been RELEASED!

Next exciting piece of news:  I'll be submitting Stephan's Monster (Vampires of Vadin #2) to the publisher by the end of this week. So YAY! 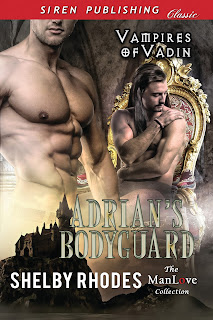 Xavier Dayden stood back and watched as King Aiden composed his thoughts. There was going to be an argument for sure. However, his kings fully intended to win the fight that was about to happen.

He briefly wondered how he had never met King Adrian. He had met the man’s father at the age of twenty-five—the man had been as much of a bastard as the previous Arcadian king, Davin.

It made sense, he supposed. When Adrian’s father, King Kade, stilled ruled, he avoided venturing into Vadin, as it was a mess to say the least. When Adrian Silvermore Bloodhart took over, he had just been named the captain of the guards. For years he mostly remained in the castle. Then when King Rand died—murder by his own twin brother—King Davin started a war with the Kingdom of Vadin. At the time, he had been forced to be Davin’s personal bodyguard. He had been stuck in the castle being King Davin’s “faithful” bodyguard—or so Davin believed up until the moment he allowed Tristan to remove the bastard’s head.

It was quite a shame that he hadn’t met the man earlier, he mused. He did find it a bit odd that Adrian was barefoot. However, it was easy to ignore when Xavier examined the rest of him. Adrian was beautiful and had a voice that was pure sex. It was causing an alarming amount of sexual scenarios to run through his head, so much so that he had been forced to adjust himself.

Forcing the thoughts away, as they were seriously inappropriate considering the current situation, he turned his focus back to the conversation going on around him.

“Yes, rumors. We ignored them at first, as rumors more often than not are just that. However, the rumors started to multiply. When more tales of attacks reached us, ones more violent than the previous, we decided it was time to investigate ourselves if there was any truth behind them. What we found, Adrian, was not reassuring. Many of your people are worried about the future. They fear what could happen. They fear for your safety.” King Aiden paused and then asked, “Adrian, is there a reason for them to fear for you? Are the rumors true? Have there been multiple attempts on your life?”

The Vampire King appeared uneasy with the line of questioning. After a moment of uncomfortable silence, he said, “I think it would be best to have this conversation in the privacy of my throne room.” Adrian turned without another word, scurried through the gate, and hurried back down the path that led to the entrance of his castle.

Xavier almost laughed at how quickly he retreated, but held it in, as he doubted his kings would find any humor in the situation. They considered King Adrian one of their closest friends, and the situation worried them.

Both the twins and the guard—who had been standing behind King Adrian—sighed as they watched him retreat.

As the man disappeared into the castle, King Aiden murmured, “I suppose we should follow…”

The guard grimaced and motioned them forward. “Yes, please follow me, King Tristan, King Aiden. I apologize for his rude behavior. He has been unusually stubborn about this whole mess.”

“It’s fine, Baylin. We knew it wasn’t going to be easy when you informed us of the situation. Obviously, he’s a bit out of sorts. Considering the situation, it’s understandable. You have nothing to apologize for,” King Tristan demurred, speaking at last.

Out of the two, Tristan was the peacekeeper. He was more levelheaded than his twin and was unlikely to let his temper get the best of him. King Aiden, however, enjoyed a good fight and usually was the first to jump in. He also tended to be a bit harsher with his words.

Though, Tristan’s temper was a sight to see when unleashed. Overall, the two seemed to balance each other out, making up for each other’s faults.

Xavier followed them in and through the castle to the throne room. The rest of the entourage, who arrived with the kings, were shown to their rooms.

There were two guards stationed outside the throne-room doors when they arrived. The throne room itself was empty aside from King Adrian. Two thrones, sitting side by side, faced King Adrian—thrones he would bet were not there earlier. As his kings sat down, the doors closed behind them, sealing the three kings, the guard Baylin, and himself inside.

They all remained quiet as the sound of the doors closing echoed throughout the room.

The hairs on the back of Xavier’s neck stood—someone was watching him. With so few in the room, it was easy to figure out who.

Adrian was examining him closely. “And who is this?”

King Aiden started to answer, but stopped when King Tristan grabbed his shoulder. Tristan seemed quite aware that now was not the time to reveal why Xavier was here. He would have to agree with the assessment, as King Adrian looked ready to bolt already.

“We’ll tell you why he’s here in time. Please take comfort in the fact that we trust him with our lives. Now, Adrian, please tell us the truth. What is going on?” Tristan pushed gently.

With a heavy sigh, Adrian admitted, “The rumors are true. There have been multiple attempts on my life, but it’s really nothing to worry about. I can take care of myself.”

King Aiden narrowed his eyes, anger building. “What about the rumors that each attack is more brutal than the last?”

Adrian began to fidget on his throne. “That rumor may also be true…”

Aiden slammed his fist down on the arm of his chair. “May be true? Adrian, it’s a yes or no question. What is being done to guarantee your safety? Is anything being done? Also, why weren’t we informed of this when it first started? Not only are you our friend, but you also rule a country that we share borders with. This is a serious matter. We could face major diplomatic problems if you are unseated. Citizens of both countries could get hurt. Why are you being so foolish as to refuse a bodyguard? Have you lost all common sense?”

Xavier winced—in his outburst, King Aiden had revealed too much. The slip-up was not one King Adrian was likely to miss.

“And how do you know I’m refusing a bodyguard?” the man asked coldly, and turned to glare at the guard Baylin. “You dirty little fink! You couldn’t win an argument, so you went and tattled on me?”

at September 13, 2017
Email ThisBlogThis!Share to TwitterShare to FacebookShare to Pinterest